Tall, lean Ned Beaumont smokes green-dappled cigars. He’s a gambler and sometimes deep thinker. Absently, he strokes his moustache with a thumbnail. Professionally, he’s a fixer for big-city political boss Paul Madvig. Beaumont is not above violence, a little blackmail and the necessary bribery that goes into keeping a metropolitan political machine running. He has a code, however expedient it might seem, and Dashiell Hammett’s The Glass Key is all about how far Beaumont is willing to go to protect and serve Madvig.

There’s enough seedy, dark atmosphere here for several noir novels, but Hammett is the father of the genre, so you expect nothing less. Reviewing this story, which 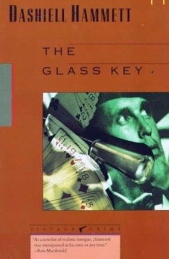 blends murder, politics, blind love and friendships pushed to the limit, from a perspective of more than 80 years after it was first printed, poses problems. Because Hammett pioneered scenes with street lights casting deep shadows across people’s faces, furtive looks and street-tough, depression era dialog, you get the feeling you’ve heard this all before. For example, the little we learn of Beaumont’s background is that Madvig picked him up out of the gutter and gave him a job. Heard that before? Perhaps Hammett lifted the line from Dickens or someone else, but in The Glass Key, he owns the tough-talk dialog and everything that came later is just a copy.

The story is relatively simple, again something we’ve seen bits of before in later dramas and novels. Madvig wants to put his political power behind Senator Henry for re-election. Beaumont counsels against it but realizes that his advice will not likely be heeded because Madvig is in love with the senator’s daughter. When the senator’s son is found murdered, there’s enough suspects to go around.

Beaumont is not a detective, but his knowledge of the unidentified eastern city’s underworld—and crooked politicians—gives him several leads to chase. Before he can start sorting out the murder, however, he has to find a bookie, Bernie Despain, who has scrammed with $3,250 of Beaumont’s winnings. That accomplished, Beaumont is beaten up, tortured and lied to, not necessarily in that order, as he deals with a sycophantic DA, a sadistic mob boss and women who are not quite what they seem.

His hair was a florid stubble above a florid, pugnacious face.

He moved the corners of his mouth impatiently.

His face was tired and sallow.

Her face was a tinted statue’s.

In combination with facial expressions, he gives the reader a generous dose of noir dialog.

“How far has this dizzy blond daughter of his got her hooks into you?”

The Glass Key was written in 1931, just after The Maltese Falcon and before The Thin Man, two of his more famous novels. It was turned into two films, a 1935 version with George Raft and a 1942 movie with Alan Ladd and Veronica Lake. Neither film is available on Netflix and only the 1942 film can be found on Amazon.

Hammett takes Beaumont on a circuitous journey–almost Kafkaesque at times–to find murderers, to find the truth and to find himself. It’s a journey most readers will enjoy and for students of noir it offers similarities and stark differences with the Falcon which preceded it.