Hear the clock ticking? It’s counting down the minutes and seconds that Scott Henderson has to live. He’s accused of murdering his wife who, he admits to police, had refused to give him a divorce. But he didn’t kill her.

At least we don’t think he did, although his alibi is almost impossible to believe. He says he spent the evening with a lady he picked up in a bar. They attended a musical revue together, then parted after the show without ever exchanging names or personal information.

Fans of Cornell Woolrich will appreciate this new edition of Phantom Lady. It contains a unique, if rambling, reminiscence about the author by someone who was his agent a year before he died. It also includes color pictures of posters from the 1944 movie based on the novel and shots of various cover treatments of the book since its original release. This beautiful edition, on heavy stock, makes a great addition to your mystery library.

If you’ve just discovered Woolrich and are working your way through his substantial body of suspense work, Phantom Lady is not a bad place to start. Although it’s not my favorite Woolrich tale, it’s an edge-of-your-seat nail-biter until the end. But that was Woolrich’s MO for more than two dozen books.

For the most part, Woolrich didn’t write detective novels. His protagonist was usually the everyman stuck in an impossible, perilous situation from which he had a limited amount of time to extricate himself. Death usually hung in the balance. That’s a good description of Phantom Lady.

Although Henderson is in jail, he has allies on the outside working to find the woman who could prove his innocence.   Henderson describes his potential savior only as a woman wearing an outlandish orange hat.   With little other information to go on, Henderson’s helpers run into one brick wall after another. And the clock is ticking toward execution day. Woolrich ratchets up the tension by leading the amateur investigators down blind alleys and into confrontations with people who 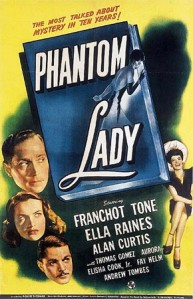 are not who they appear to be.

As I may have said in this space before, I think Woolrich’s work is on par with the best of noir, Chandler, Hammett and Cain. But for Phantom Lady, I have a few complaints. At one point Woolrich seems to have been influenced by the marijuana scare that had swept the county a few years before. After a national propaganda campaign tinged with racism, Congress made possession of marijuana illegal. Woolrich repeats the unfounded allegations of pot enflaming emotions leading to violence.

When the book is just getting up steam, it languishes for a chapter made up primarily of a prosecutor’s pompous and dated summation to the jury. Perhaps Woolrich wanted the prosecutor’s case to sound windy and trumped up. It nevertheless slows the reader.

The ending is surprising and difficult to anticipate. Almost too difficult. It requires a protracted explanation.

These objections aside, Phantom Lady is suspenseful and as fast paced as Woolrich readers expect.

Woolrich was in his prime in the 1940s and wrote more than one novel per year, using two pen names in addition to his real name. Phantom Lady is in good company