Hollie Overton is one of a number of TV writers—Sue Grafton comes to mind—to  become  a successful mystery writer.  Her first novel, Baby Doll, was a bestseller last year. 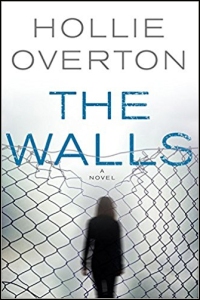 Overton wrote for Cold Case and The Client List and is currently working on the second season of Freeform’s Shadowhunters.  Her new book, called a pulse pounding thriller by Publishers Weekly, is a story of domestic violence and the morality of murder.

In The Walls, Overton’s protagonist is Kristy Tucker a press agent for the Texas Department of Corrections.  (Overton is a native Texan.)  Tucker handles everything on death row from inmate interviews to chronicling the last moments during an execution. Her job exposes her to the worst of humanity, and it’s one that’s beginning to take its toll.

So when Tucker meets Lance Dobson, her son’s martial arts instructor, she believes she has finally found her happy ending. She’s wrong.

She soon discovers that Lance is a monster. Forced to endure his verbal and physical abuse, Tucker is serving her own life sentence…unless she’s willing to take matters into her hands. Perfectly poised to exploit the criminal justice system she knows so well, Tucker sets out to get rid of Lance — permanently.