The Pontiac on the cover of my new book, Desert Kill Switch, is a bona fide classic.  A high-powered muscle car from the early 1970s, the Firebird is immaculately restored and lovingly maintained. How I found it is as much a mystery as the ones my amateur detectives solve in the novel.

Authors aren’t always involved in the creation of their book covers.  For my first nonfiction book I got a chance to see the cover before printing because I flew to New York to see my publisher.  On the next  book,  I saw the cover when it came out.  My present publisher, Black Opal Books, is relatively small and my editor there was open to my ideas, indeed to my work to create the cover.  I’ve done photography professionally so I planned to take the cover photo myself, then turn it over to the cover’s designer.

Finding this beautiful 1972 Pontiac Firebird Trans Am was slightly more difficult than finding the inhospitable desert scene for the cover of Desert Kill Switch.

Before I’d finished writing the book, I knew a vintage car belonged on the cover.  And a bleak desert landscape.

Vintage muscle cars, including a Pontiac Firebird Trans Am, figure prominently in the plot.  The setting of all the Nostalgia City mysteries (book #3 coming soon, I’m working on #4) is an Arizona retro theme park that recreates a 1970s small town, complete with everything from the period from music and hairstyles to stores and automobiles.  In Desert Kill Switch, protagonist Kate Sorensen supervises an exhibit booth at a vintage car and rock and roll festival in Reno, Nevada, to attract nostalgia aficionados to the Arizona park.

So with the Arizona and Nevada deserts as the locales and classic cars as the outstanding set pieces, imagining the cover photo was not difficult.  Finding a showroom-condition cruiser—and a willing owner—was a greater challenge.

I live in Reno where an actual summer retro festival, Hot August Nights, is held annually, attracting more than 6,000 classic cars from all over the U.S. and several foreign countries.  Part of my inspiration for creating Nostalgia City came from this event, Reno’s largest.

The problem was, I didn’t get around to actually deciding on a cover photo until months after the festival had ended and the beautiful wheels had rolled back to their various home towns. I might have had my pick of vintage Mustangs, T-birds, Camaros, Barracudas and other terrors of the boulevard.

Instead, I started looking locally by checking out the websites of vintage car clubs in the area.  I saw a few promising models, but I either couldn’t get in touch with the owners or they were not interested. 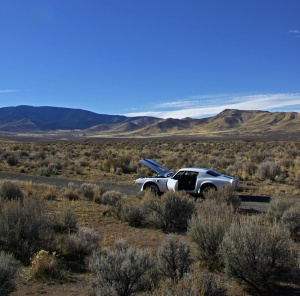 No sign of civilization anywhere in this shot of the Nevada Great Basin Desert. But it’s really just 30 miles north of Reno.

While I searched for a car, I also explored the area around Reno for an appropriate setting.  I wanted a photo that showed nothing but desert and hills.  No buildings, no power lines, no billboards or signs of any type.  Northern Nevada is mostly open space.  In fact, the whole state is open space, so you’d think it would not be difficult to find a suitably desolate spot.  Of course I could use Photoshop to remove utility poles or other signs of civilization, but if an image is cleaner to begin with, fewer artificial enhancements are necessary.

Reno is bordered on the west by the soaring mountains of the Sierra Nevada so that left three directions to explore, and ultimately I found my spot about 30 miles north of town.  Now I needed the car.

A Firebird Trans Am on a San Francisco car club website caught my attention.  It was similar to a car that disappears early in the book and creates the story’s first mystery.  Coincidentally, this beautiful 1972 Trans Am was owned by James Mandas of Reno.  I emailed him and he agreed to have his car pose for a photo.  This was in September.

We had an unusually rainy winter that year and for weeks the desert area I found for the photo was wet with standing water.  Not quite the dry, barren look I sought.   We scheduled and rescheduled the photo shoot over about two months.  I was thankful for Mandas’ patience.

Ultimately a dry, sunny November morning dawned.  Mandas hauled a covered trailer containing his handsome vintage Pontiac out to the desert and I spent two hours shooting the car from a variety of angles and elevations.

I had my cover photo.

The car’s raised hood and open door signal trouble.  The driver is missing.  The mystery begins.