James Vanning is lonely, depressed, afraid and plagued by insomnia.  In other words he’s a classic protagonist in a noir novel.

The commercial artist and World War II vet is on the run from the police and a gang of bank robbers.  He’s holed up in a small New York City apartment selling his work to ad agencies to get by and feeling sorry for himself.  As an average guy 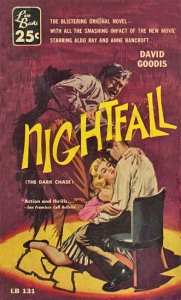 entangled in a seemingly unexplainable criminal morass, he could be a character in a Cornell Woolrich novel.  Instead he’s the creation of another respected noir author, David Goodis, noted for his mystery, Dark Passage, that became a Bogart and Bacall movie.

In Nightfall, published in 1947, Goodis imperils Vanning without letting the reader know too many details.  Except for one thing: he’s killed someone, or is convinced he did. And, he’s scared.

“He wanted to go out.  He was afraid to go out.  And he realized that.  The realization brought on more fright.”

A few sentences later a Woolrich-style premonition: “…something was going to happen tonight.”

Vanning knows that the story of the killing, as he remembers it, is so preposterous no cop or DA would believe him. We learn bits and pieces: A Seattle bank was robbed of $300,000.  One of the gang responsible for the robbery was murdered. The money disappeared.

The story unfolds through chapters of alternating points of view, that of Vanning and of Fraser, the NYC police detective following him.  Married with three children, Fraser (we never learn his first name) has been shadowing Vanning for months and thinks he knows nearly all aspects of the artist’s solitary life.  But he worries the case may be his undoing.  His superiors are calling for an arrest and return of the money.  And Fraser has doubts.

Despite overwhelming evidence against Vanning, Fraser thinks he might be innocent.  “With what they have on him already,” Fraser tells his wife, “they can put him on trial and it’s a hundred to one he’d get a death sentence.

“They’ve got witnesses, they’ve got fingerprints,” Fraser says, “they’ve got a ton of logical deduction that puts him dead center.  And what I’ve got is a mental block.”

Vanning’s faring no better.  His memory is full of holes.  He knows END_OF_DOCUMENT_TOKEN_TO_BE_REPLACED