A drunken, overweight, apparently homeless man who sleeps on the ground under a dirty serape and rarely washes is the moral authority in Sailor’s life.   Referred to only by his nickname, Sailor arrives in Santa Fe, New Mexico on a bus from Chicago.  He’s tailing his boss, corrupt former Illinois Senator Willis Douglas who has gone west with a beautiful young woman and a retinue to escape turmoil generated by his wife’s murder.

Sailor’s packing a gun along with a load of prejudice and delusion.

Hot and dirty Santa Fe is filled with hayseeds and yokels.  A hick town. Sailor is repelled by the populace.  Mexicans and Indians mostly, who he refers to in vile, insulting terms.   Not out loud of course, “this wasn’t the time or place.” 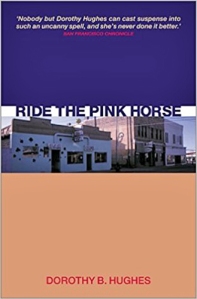 He’s come to town to have a showdown with his boss who he refers to simply as the Sen.  The Sen owes him money.  The murder of Mrs. Douglas was bungled.  She died, but not according to plan.  Other members of Sailor’s Chicago gang have high-tailed it out of town, Ziggy down to Mexico where Sailor plans to meet up with him.  With cash from the senator, Sailor and Ziggy can start some business, some scam in Mexico and live high.

In Ride the Pink Horse, a 1946 crime novel by noir writer Dorothy B. Hughes, the New Mexico environs play a strong role.  The multi-ethnic culture and the small dusty western town that vexes Sailor contributes to Hughes’ heavy themes.

Before Sailor can track down the senator, he has to find a place to stay for the night in this “God-forsaken town.”  He discovers that Santa Fe—never identified by name in the book—is crowded with people in town to celebrate the Fiesta weekend.  No hotel rooms are available anywhere.  Sailor becomes frustrated, angry and disdainful but at the same time disoriented and fearful.  His suitcase becomes a heavy burden.  He’s haunted by the eyes of the Indians he passes in the street. END_OF_DOCUMENT_TOKEN_TO_BE_REPLACED