Register for a free copy

Death in Nostalgia City, the first book in the Nostalgia City mystery series, is available free, for a limited time, on Goodreads.com. The Goodreads giveaway will close on April 15. Now why did I pick that date?

Regardless, just mosey your mouse over to: https://www.goodreads.com/giveaway/show/343368?utm_medium=api&utm_source=giveaway_widget  and register to win a free copy. 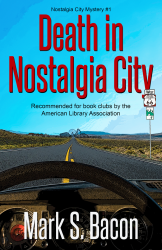 Here are the answers to the 1970s trivia quiz.  To review the questions go here, or if you’re reading this on the website, just scroll down.

No. 10.  The other seemingly difficult question was to name the event that did not occur in the 1970s. All of the listed events, such as the 55 MPH National Speed Limit Law (imposed in 1975 to help save gasoline) took place in the 1970s except the crash of the Pan Am jet over Scotland.  That happened in 1988.  BTW, it took Little League, founded in 1939, until 1974 to permit girls to play. The decision was the result of a lawsuit.  And, Robert Redford, Paul Newman, Eileen Brennan and others starred in The Sting which won the best picture Oscar in 1973.