Voice is one of those shadowy, complicated areas in writing. The term voice in writing is in itself a metaphor right? Right, but a metaphor for what?

That can be a difficult question to answer. Is voice the sound you bring to text? Is voice the environment or character in whatever flavor you create when you fill a page? Not easy questions.

In researching publishers, agents, etc., in effort to get my books to market I would see the words strong voice, on at least 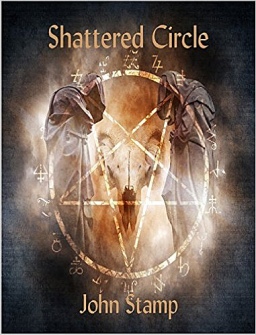 eighty percent of the submission pages I read, and I read a lot of them. So voice is important, but if you ask twenty people what voice is in writing you might get fifteen different answers. So, since this is my post, I get to lay down the definition.

For me, having an authentic voice in my crime thrillers is paramount. Among the writers I’ve always looked up to are Wambaugh, Leonard, and Crichton.

In Elmore Leonard I was drawn to the grit in his words, the bare humanity he illustrates so well in his writing. From his early westerns to his more famous string of crime novels, Leonard’s voice, the flavor of his writing, resonated so authentically that the man seemed a master of the grey area of human nature.

In Michael Crichton’s work, I found he had a magical ability to explain the science behind his fiction in a way that could keep a lay reader engaged. Whether the science was sound or he made it up as he went, his background as a medical doctor allowed him to blend his heavy science background with his creative voice.  He could give a lecture on DNA processing, quantum physics, or mechanical engineering while at the same time keeping us turning the pages.

With Joseph Wambaugh’s work, I found the way he captured the subtle intricacies of police culture utterly fascinating, and it became the standard I set for myself as a writer. He can illustrate the fine details of what takes place in a police cruiser so expressively that the tight confines of a Ford Crown Victoria become a world unto its own.

Each of these writers carried their voice across the page in a way that evoked an expertise as we listened to their narrative in our heads. Wambaugh was an officer in the Los Angeles Police Department. Crichton, as I’ve said, was a medical doctor. Having that expertise and experience as a foundation for their voice gave an air of authority to their work that is rare and genuine. 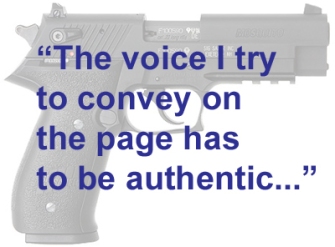 Like Wambaugh, I was a police officer. I was also a special agent with both the FBI and the NCIS. When I started writing, I wanted to be sure that if I was writing a crime thriller I would be able to speak to that law enforcement culture and bring it to the page. My voice as an author is directly tied to my background and experience.  I want to bring my readers with me to experience what it is like when a simple call for police service degenerates to a life-or-death situation, or the sensation of running code three (lights and sirens) down a crowded city street.

Since my books have come out with the assistance of Solstice Publishing, I have received a few compliments on my work. The first was from a friend who told me that he forgot he was reading a friend’s book. Anyone who has tried to get people interested in their work knows how great a compliment that is. The second, while no less a compliment than the first, spoke specifically to the authentic voice I try to bring to my work.

The guy lending the compliment was a long-time police officer. While reading my debut work, Brother’s Keeper, a crime novel about estranged partners coming together to take down a multi-national human trafficking ring, he came to a passage where my two heroes, patrol officers, responded to a domestic violence call.  He called me after reading the chapter and told me he felt as if he lived through that call right down to his own racing heartbeat. A compliment I attribute directly to the voice I try to bring to my crime novels.

An author’s voice can mean many things to many writers. For me, the voice I try to convey on the page has to be authentic to the world I’m creating. I want my background and experience in the field to help paint the picture for my readers. To help them live that life from cover to cover.

Author and former FBI agent John Stamp has broad experience in law enforcement.  In his recently released novel, newly minted detective Jackson Cole has to investigate a trio of grisly murders and his first clue is, blood magic.  Shattered Circle is a crime/paranormal thriller set in Charleston, S.C.