The first of Rosengren’s Eddie Collins series begins with actor Josh Bauer on a bearskin rug in front of a roaring fire with buxom, but temperamental, Ruby Landreaux in his arms. What comes next is up to Eddie Collins, a part-time actor and ex-husband of

Landreaux—who is really actress Elaine Weddington—when Weddington turns up dead, her bearskin escapade simply a scene in an unfinished movie, Flames of Desire.

The production’s insurance company hires Eddie to represent their interests in the Americana Pictures film. Private eye is Eddie’s main gig now, although he doesn’t turn his back on acting jobs when they come his way.

Weddington was a star of sorts, though her pictures were B-movies and never up for major awards. Encroaching middle age meant her leading-lady days were numbered, and she worked with a lot of jealous wannabes. Did one of them off her? What about her personal assistant or live-in boyfriend? While searching through Weddington’s  trailer, Eddie finds a list of initials with corresponding phone numbers. As he gradually ticks off the entries, he begins to form an unwelcome, less idealized version of Weddington. Then an assistant director is killed as she is about to share a damning revelation. The quest to identify one set of initials almost puts him in the hospital. Can Eddie handle the truth? Will it set him free, or kill him?

Clive Rosengren is a recovering actor. His career spanned more than forty years, eighteen of them pounding many of the same streets as his fictional sleuth Eddie Collins. Movie credits include Ed Wood, Soapdish, Cobb, and Bugsy. Among numerous television credits are Seinfeld, Home Improvement, and Cheers, where he played the only person to throw Sam Malone out of his own bar. He lives in southern Oregon’s Rogue Valley, safe and secure from the hurly-burly of Hollywood.

Six million acres of Adirondack forest separate Natalie and Doug Larson from civilization. For the newlyweds, an isolated backcountry honeymoon seems ideal—a chance to start their lives together with an adventure. But just as Natalie and Doug begin 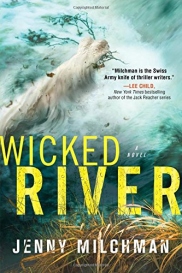 to explore the dark interiors of their own hearts, as well as the depths of their love for each other, it becomes clear that they are not alone in the woods.

Because six million acres makes it easy for the wicked to hide. And even easier for someone to go missing for good.

As they struggle with the worst the wilderness has to offer, a man watches them, wielding the forest like a weapon. He wants something from them more terrifying than death. And once they are near his domain, he will do everything in his power to make sure they never walk out again.

Jenny Milchman is a suspense writer from the Hudson River Valley of New York State. Her debut novel, Cover of Snow, was published by Ballantine/Random House in January 2013 and won the 2013 Mary Higgins Clark Award for best suspense novel of the year.  Milchman is a board member and Vice President of International Thriller Writers and the founder of Take Your Child to a Bookstore Day, celebrated in all 50 states and four foreign countries 2013. She also teaches writing and publishing for New York Writers Workshop and Arts By The People.

Elaine Viets, Agatha, Anthony and Lefty award winner and author of 32 mystery novels has had a lot of dead-end jobs.  Nearly 15 of them.  She toiled at these assorted occupations as research for her Dead End Job mystery series, the first 13 novels of which are being re-released in e-book format by JABberwocky Literary Agency in New York.  The books tell 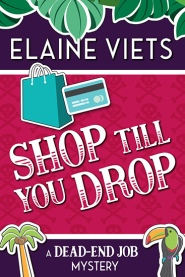 the story of Helen Hawthorne.  The St. Louis woman who earned a six-figure salary came home early one day to find her husband having sex with her neighbor.  As Viets says, “Helen picked up a crowbar and started swinging.  She wound up in South Florida working jobs for cash under the table.”

The re-released humorous mystery series sees Helen working in a pet store, selling wedding dresses, cleaning hotel rooms and performing a variety of other “dead end” jobs and murder seems to follower her into the variety of occupations.

Elaine Viets’ collection, A Deal with the Devil and 13 Short Stories, will debut next month.  Her latest novel is Fire and Ashes, an Angela Richman, Death Investigator mystery. She’s also written the Josie Marcus mystery shopper mysteries and the Francesca Vierling mysteries. She’s been toastmaster and guest of honor at the Malice Domestic Mystery Conference.

Writers as well as mystery fans read this blog so this nonfiction, non-mystery book is dedicated to them.

If you’re a seasoned author or an aspiring writer, chances are you’ve grappled with your share of rejection, setbacks, and heartbreak. However, literary agents say the number one

key to writing success is perseverance in the face of disappointment.

Daily Writing Resilience provides advice, inspiration, and techniques to help you turn roadblocks into steppingstones. You’ll find tips and support through exercises such as meditation, breath work, yoga, stress management, gratitude, de-cluttering, sleep, exercise, mindful eating, and more. These 365 meditations will help you navigate the ups-and-downs of your writing practice, creating positive habits that will guide you toward the success and fulfillment that you’ve been seeking.

Bryan E. Robinson, Ph.D. is a mystery novelist, licensed psychotherapist, Professor Emeritus at the University of North Carolina at Charlotte, and a Fellow of the American Institute of Stress. He has authored more than thirty-five nonfiction books.

Ed note:  click on the book covers for more information.  Prices may vary depending on when and where you shop.