Cas Russell is good at math. Scary good. The vector calculus blazing through her head lets her smash through armed men twice her size and dodge every bullet in a gunfight, and she’ll take any job for the right price.

As far as Cas knows, she’s the only person around with a superpower…until she discovers someone with a power even more dangerous than her own. Someone who can reach directly into people’s minds and twist their brains into Moebius strips. Someone intent on becoming the world’s puppet master.

Cas should run, like she usually does, but for once she’s involved. There’s only one problem, she doesn’t know which of her thoughts are her own anymore

For young adult readers who have read the first book in the series, Snowed, this book continues the story.

Kidnapped by his father, Aidan MacNichol returns home to a terrifying ice fortress in the Arctic Ocean. His dying father makes Aidan a deal: if Aidan finds a mysterious healing agent beneath the fortress, he’s free to leave. Aidan sets out on the perilous journey for the cure, but finds the cost is far greater than he could possibly imagine.

Meanwhile, Charity Jones leads her friends on an armed, high-tech expedition to the Arctic coordinates she’s seen in her dreams. Their mission: to kill Krampus and save Aidan. But when Charity discovers Aidan’s shocking fate, she makes a mistake that starts the countdown to apocalypse. Can Charity and her team stop the clock? Or will humanity pay the ultimate price?

English professor Lila Maclean knew drama would be involved when she agreed to consult on Stonedale University’s production of Puzzled: The Musical. But she didn’t expect to find herself cast into such chaos: the incomprehensible play is a disaster, the crumbling theater appears to be haunted and, before long, murder takes center stage.

The show must go on—yet as they speed toward opening night, it becomes clear that other members of the company may be targeted as well. Lila searches for answers while contending with a tenacious historical society, an eccentric playwright, an unsettling psychic, an enigmatic apparition, and a paranormal search squad. With all of this in play, will she be able to identify who killed her colleague…or will it soon be curtains for Lila too?

Remember: Online book prices may vary depending on the day you order and the bookstore or website. 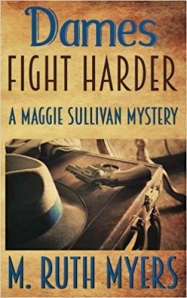 Murderer or independent woman? Murder at a construction site draws Ohio private investigator Maggie Sullivan into a case that makes cops mistrust her and friends doubt her. The suspect, Rachel Minsky, is Maggie’s closest friend – and all signs point to Rachel’s guilt.

Rachel ignores the rules society imposes on women. That independence, in 1942, as well as her success in business, has made her enemies. Yet the dead man also had an unsavory secret or two, starting with his missing mistress. Who was the murderer’s real target? And what is Rachel hiding from the only person who can save her?

The city Maggie scours for clues to the real killer has been altered by America’s recent entry into World War II. Shortages of men and material have created new motives for murder. As the case and Maggie’s relationship with policeman Mick Connelly heat up, Maggie finds herself caught in currents that threaten to drown her.

M. Ruth Myers, author of more than a dozen books, was a newspaper reporter in Michigan and Ohio. Her books have been translated into seven languages. She earned the Shamus Award in 2014 for Don’t Dare A Dame, the third book in her Maggie Sullivan series.  Find Myers at https://ruthnew.com/bookstag/maggie/

Cynthia Kuhn’s latest book is the second in her academic mystery series.  The first book in the series, The Semester of our Discontent, received the Agatha Award.

When Professor Lila Maclean is sent to interview celebrated author and notorious cad Damon Von Tussel, he disappears before her very eyes. The English department is thrown into chaos by the news, as Damon is supposed to headline Stonedale University’s upcoming Arts Week.

The chancellor makes it clear that he expects Lila to locate the writer and set events back on track immediately. But someone appears to have a different plan: strange warnings are received, valuable items go missing, and a series of dangerous incidents threaten the lives of Stonedale’s guests. After her beloved mother, who happens to be Damon’s ex, rushes onto campus and into harm’s way, Lila has even more reason to bring the culprit to light before anything—or anyone—else vanishes.

Cynthia Kuhn is professor of English at Metropolitan State University of Denver and current president of Sisters in Crime-Colorado. The Art of Vanishing was a a Lefty Award nominee for best humorous Mystery. The third in the series, The Spirit in Question, will be out in the fall.  Visit her at cynthiakuhn.net.

Set in an imagined town outside Tokyo, Clarissa Goenawan’s dark, literary debut follows a young man’s path to self-discovery in the wake of his sister’s murder. 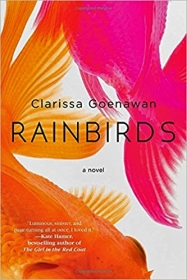 Ren Ishida has nearly completed his graduate degree at Keio University when he receives news of his sister’s violent death. Keiko was stabbed one rainy night on her way home, and there are no leads. Ren heads to Akakawa to conclude his sister’s affairs, failing to understand why she chose to turn her back on the family and Tokyo for this desolate place years ago.

But then Ren is offered Keiko’s newly vacant teaching position at a prestigious local cram school and her bizarre former arrangement of free lodging at a wealthy politician’s mansion in exchange for reading to the man’s ailing wife. He accepts both, abandoning Tokyo and a crumbling relationship there in order to better understand his sister’s life and what took place the night of her death.

Clarissa Goenewan is a debut novelist.  She is an Indonesian-born Singaporean writer. Her award-winning short fiction has appeared in literary magazines and anthologies in Singapore, Australia, the UK, and the US.  Goenewan’s website home is: http://clarissagoenawan.com/

Editor’s note:  Prices for the above books may vary depending on the retailer and when you access sales sites.  Click on the book covers for more information.