As I was saying last time, I love theme parks. And since the time I worked for one, I’ve thought a theme park would be a great setting for a murder mystery.  So let’s start at the beginning.

Many, many years ago I was a young copywriter in the advertising department at Knott’s Berry Farm. At the time, Knott’s was an old west ghost town complete with roving gunslingers. It also included a charming combination of carnival type rides, shops and some new, inventive attractions.  Although I spent most of my time in an office writing ads and commercials, I had an opportunities to work on the park grounds, explore behind the scenes, and get to know some of the costumed employees who entertained guests.

Not so many years ago, when I found a publisher for my first murder mystery, the story was set in a theme park, based in part on my earlier experiences at Knott’s.  But instead of fashioning my theme park like Knott’s—or any other park—I wanted to do something different. I created an entire 1970’s small town, Nostalgia City. It’s a trip back in time, a meticulous re-creation,  complete with pet rocks, leisure suits, disco and period cars from Pontiacs to Pintos.

Four years ago, as I mentioned last time, I went to Disney World with my two grown daughters. It was a trip of a lifetime and I picked up further inspiration. Nostalgia City, I decided, needed new, high-tech dark rides, thus the title of my next book: Dark Ride Deception. A dark ride is simply theme park jargon for indoor attractions.  The old-fashioned boat ride through the tunnel of love is a dark ride dating back more than a century. 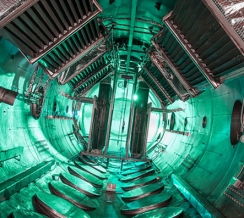 Is this the type of theme park ride that the Perception Deception Effect can create?

Lyle is relatively tech savvy, but the details of the Perception Deception Effect prove perplexing. He gets technical help from a Nostalgia City engineer who becomes a little too over-excited about sleuthing.

The novel focuses not on high-tech minutia but on intrigue and Lyle’s struggles.

The plot is obviously based in part on the science behind dark rides, and one of the book’s characters, a Nostalgia City computer programmer, dissects one of Disney’s most famous, yet relatively unsophisticated rides.  But the novel focuses not on high-tech minutia but on intrigue and Lyle’s personal struggles as he searches for the secrets.  He hides behind a variety of false identities to investigate Florida parks—from the inside—yet when someone threatens to blow his cover…

But that’s enough of a preview.  Like I said, I love theme parks, and I loved writing about them in Dark Ride Deception.

The book is available for preorder wherever you get your e-books.  It will be released Sept. 20.