Tag Archives: The Edge of Normal

Carla Norton has rewritten the benchmarks for novels about child kidnappers, upping the tension while introducing a new type of leading character—a kidnapping and abuse victim. Reeve LeClaire is really no investigator. Struggling in all areas of her life, but managing to persevere, barely, after being held captive for four years, Reeve is drawn into helping a 13-year-old kidnap victim.

In her early 20s, Reeve has worked to form a life for herself six years after her own ordeal. When Reeve’s therapist is asked to assist in the case of Tilly, a young teen who was abducted and freed, Reeve jumps in to help. Leaving San Francisco for a small northern California town, Reeve discovers Tilly has suffered some of the same cruelties as she did. Police have arrested someone suspected of being Tilly’s tormentor—but there’s more. Much more. Reading through to the edgy, rewarding conclusion you learn Norton has also created new meaning for the word creepy.

Publishers Weekly said, “Norton skillfully keeps the suspense taut with myriad surprises while giving a tender look at victims whose ordeals are rehashed by lawyers, the media, and pop psychologists.” 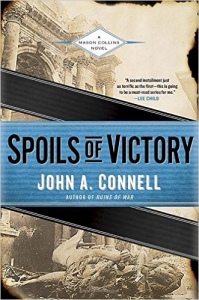 Former Chicago police detective, soldier, POW, and now-U.S. Army criminal investigator, Mason Collins finds himself in Garmisch-Partenkirchen, a scenic Alpine ski town that managed to escape the destruction of World War II. Months after the Nazi’s defeat, the town is the home of fleeing war criminals, a depository for the Nazis’ stolen riches. With millions of dollars to be made on the black market, murder, extortion, and corruption have become commonplace. END_OF_DOCUMENT_TOKEN_TO_BE_REPLACED