Spring is here, and no one is celebrating.

But once you’ve taken all the sensible precautions and are staying home and safe (and have on a clean pair of pajamas) you have options to make life more enjoyable.  A positive attitude is a good start.  You control what’s going on in your head.  Why not focus on something other than the virus.  Pick up a book.

Welcome to my survival guide, based on simple things I’ve been doing to offset the grim news.

My coping advice began with cookies (see part 1).  Next, dive into a good novel and get transported away. Getting lost in a mystery lets you take a brief but necessary vacation from reality.  The respite can revive and help you reassess priorities. If you’re working outside your house or are busy home schooling your kids, squeeze in an hour or so of reading when you can. It’s an easy and inexpensive way to escape the uncertain present.

My wife and I were away from home in California when the Covid-19 alarms belatedly started to sound and Governor Gavin Newsom issued one of the first lock-down orders in the country. To get home we had to drive through the Donner Pass in the Sierra Nevadas, but a series of snow storms had taken up residence. Add to that I had acquired a sinus infection—something that had me taking my temperature every few hours to be sure it wasn’t you-know-what. I was sick and  stuck in our tiny vacation rental, so I turned to books.

Here are recommendations and a caution.

Praise for Where the Crawdads Sing by Delia Owens is everywhere.  It’s a beautiful coming of age story, an invitation to explore and appreciate nature—from frolicking microscopic life to squawking gulls—a love story of sorts and a meditation on social isolation. It’s also a mystery. Blended seamlessly, these elements create a story that will carry you away to the coastal marshlands of North Carolina and make you forget just about all else.  It was the first book I read when the lock-down began and was just what I needed.

Next, when the bad news completely seeped into my consciousness, I reached for The Plague by Albert Camus. I’d read it years ago and still had it on my Kindle. Very timely I thought, but I couldn’t read more than a few chapters.  It’s too realistic. First, the rats start dying…  It’s a classic by the French existentialist author, complete with allegory, but not for now.

I’ve been working my way through Ross Macdonald’s Lew Archer PI series and picked up The Zebra Striped Hearse. This complex story, published in 1962, begins with a rich ex-military man hiring Archer to dig up dirt on his daughter’s fiancée who he suspects of being a gold digger. The repressed 24-year-old daughter has fallen for an itinerant artist who’s been traveling under a variety of aliases.

Macdonald displays his Chanderesque style—“The officers on duty took turns looking at my license as if it was something I’d found in a box of breakfast cereal”—and propels his protagonist through multiple deaths and locales from rural Mexico to Malibu to Tahoe. It’s an emotional ride populated mostly by melancholy characters and it comes with a twist-upon-twist ending. The book appeals to your head and heart.

The Cohen Bros are reportedly working on a film version that, from early accounts, will carry the novel’s name and little else from the book.

Takeoff by Joseph Reid is a thriller with mystery elements revealed gradually through the fast-moving story.  The foundation of the book is the well-rendered relationship between Max, a rising sixteen-year-old female rock star, and Seth Walker an emotionally vulnerable federal air marshal assigned to protect the recalcitrant phenom on a cross-country flight.  When they land at LAX instead of handing off Max and getting back to his regular job, Walker and his charge are greeted with automatic weapons fire. The two go on the run, pursued by unknown gunmen while Walker suspects betrayal by federal agents.  Walker is an electrical engineer with more than a dozen patents to his name and uses his ingenuity to keep he and Max alive while he tries to uncover details in the young girl’s past that may be influencing her present.  Likable characters in bad trouble make for an engrossing read. 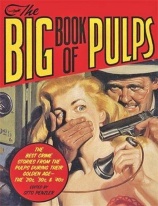 My next read, after we’d finally made it home, was a book I’d purchased a few years before and never had much time for.  Know the feeling? The Big Book of Pulps is a collection of dozens of noir stories from the 1920s through 1940s. The table of contents looks like a directory of the best authors in the genre.  Rather than begin at the beginning, I started with my favorite authors. The book contains three stories each by Raymond Chandler, Cornell Woolrich and Dashiell Hammett. Other authors include James. M. Cain; Carroll John Daly, credited with writing the first U.S. detective novel; and Earl Stanley Gardner. In one Gardner story, Ken Corning, precursor to Perry Mason, leaps on the running board of a car and battles gunmen. Not the deft courtroom-style exchange you might expect from watching Raymond Burr.

Each story is introduced with commentary by Otto Penzler, editor and owner of the Mysterious Bookshop in New York City.  He provides useful biographical information on the authors, background on the stories and when and where each was originally published.  As the book’s title suggests, all the stories were first published in inexpensive pulp mystery magazines such as The Black Mask.

At 1,163 pages and weighing more than two pounds it requires two hands, a table or bookstand to read comfortably.  Each page contains two columns of type so the book may actually be much longer than its page count indicates.  In addition to short stories, the book includes two complete novels.

The last episode of my survival guide, on movies, will arrive in this space tomorrow