Do we all have a dark side?  And is it socially acceptable only for writers of mystery, suspense or horror stories to expose the shady or macabre side of their psyches?  Jim McCormick, as friendly and likeable a guy as you’d ever meet, certainly has a macabre sense of humor.  Odd forms of murder and mayhem are often an element in his 100-word stories.   You’ll find some of his work in different places on this website.  I’m pleased to introduce his latest. 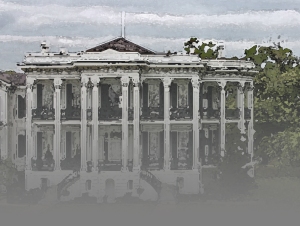 Stone Motor played a gig in the music room of a moss-shrouded antebellum mansion near the Mississippi.   Its audience included the usual bland tourists and a blue-haired guide named Maude who disavowed the South’s loss in the War between the States.  Lately, she’d been trying to poison visitors from up north with complementary mint juleps.  Melvin Carnahan of Boston accepted one, and he expired as he drove off the plantation.  The band’s lead singer was arrested; seems he had a likeness of Jeff Davis tattooed over his heart.  Soon after, Maude seized the mike, and the rest was history.